To find audiences for goods and services, advertisers need to catch their attention. A place to find North American audiences’ attention is on Facebook’s suite of apps. In 2020, Americans spent an average of 65 minutes per day on Facebook and Instagram, and in Q4 2020, Facebook had a combined 195 million daily active users (DAUs) in the United States and Canada.

To maximize the productivity of each advertising dollar on Facebook, advertisers need to understand how the platform delivers value to its users. After discussing Facebook’s organic post-ranking system, this article will recommend strategies that guide brands toward Facebook auction choices that maximize their audience reach and drive new customer growth.

Facebook reports that each Facebook user has more than 1,000 “candidate posts” that could appear in their feed each day. Candidate posts include any non-deleted post shared with a user by a friend, Group, or Page that they are connected to and has not yet seen or were made since their last login. Facebook scores these candidate posts using multiple filtering and scoring rounds that consider a wide variety of factors, such as:

Facebook ultimately aims to deliver posts in each user’s feed that maximizes the value the user spent on the platform.

Through years of observing a user’s in-app activity, Facebook may know that a specific user “likes” posts at a low rate, “saves” posts that provide them future value, and only comments on posts that are highly relevant to them (e.g., a significant event from a close friend). With this knowledge, Facebook will assign a post a higher ranking score for their News Feed if they predict the user will choose to save it rather than like it.

Furthermore, Facebook may know this user is much more willing to watch a long video in the evening at home rather than at lunchtime outside of their home. The “contextual pass” in Facebook’s post-ranking system is likely to boost the ranking scores of long video candidate posts when I’m browsing my News Feed in the evening. The infographic below provided by Facebook, gives a simple overview of their post-ranking system. 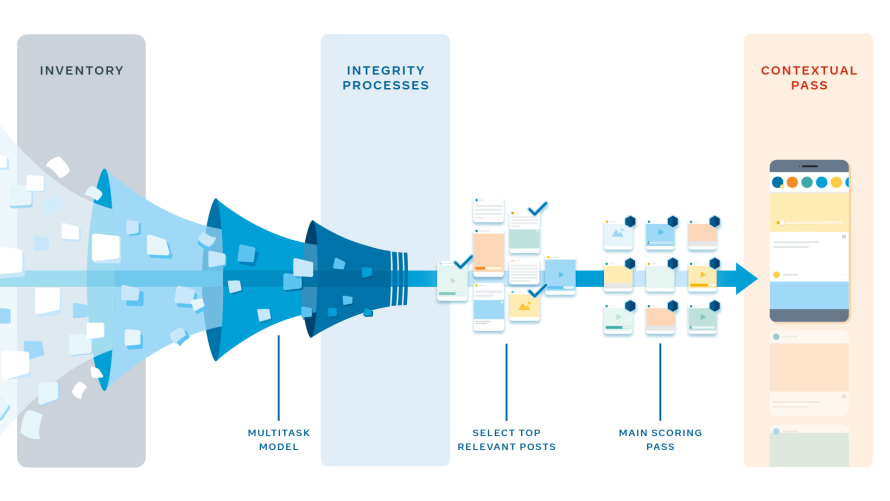 Familiarity with Facebook's organic post-ranking system is vital to paid social advertisers. The Facebook advertising auction is designed to maximize user value using many of the same processes and much of the same user information leveraged when ranking unpaid posts.

Advertisers have many input levers to help Facebook optimally deliver their paid ads. The most important is ad creative. If the ad does not drive potential consumers to the desired action, it doesn’t really matter whether the ad is delivered to the right person at the right time for the right cost. But, once the creative is ready, how should an advertiser bring it to auction to maximize value?

While the audience selection lever has decreased in importance with the advent of new Facebook products like Dynamic Ads for Broad Audiences (DABA) and new constraints like iOS14’s AppTrackingTransparency framework, one vital and often overlooked audience optimization lever remains unchanged: Campaign Objective selection. Below, we’ll guide you through a few fundamental principles that have a profound impact on advertising performance.

Facebook is a for-profit company. In 2020, about 97.9% of its global revenue was generated by advertising. To maximize advertising revenue, it needs both user attention and advertiser confidence, and it works hard to balance each party’s satisfaction. Happy advertisers with unhappy users diminish Facebook revenue and vice versa.

Earlier in this article, we discussed Facebook’s deep knowledge of user activity toward organic posts. Facebook also has a deep understanding of user activity towards paid posts from years of serving ads to its users. Facebook knows which people often click ads and which people rarely click ads. It knows who’s open to downloading a new app and who’s willing to enter their information into a lead gen form. It even knows who’s actively shopping for shoes outside of its News Feed because most advertisers have embedded the Facebook Pixel in their site code to measure their advertising efforts and generate audiences based on visitor activity. 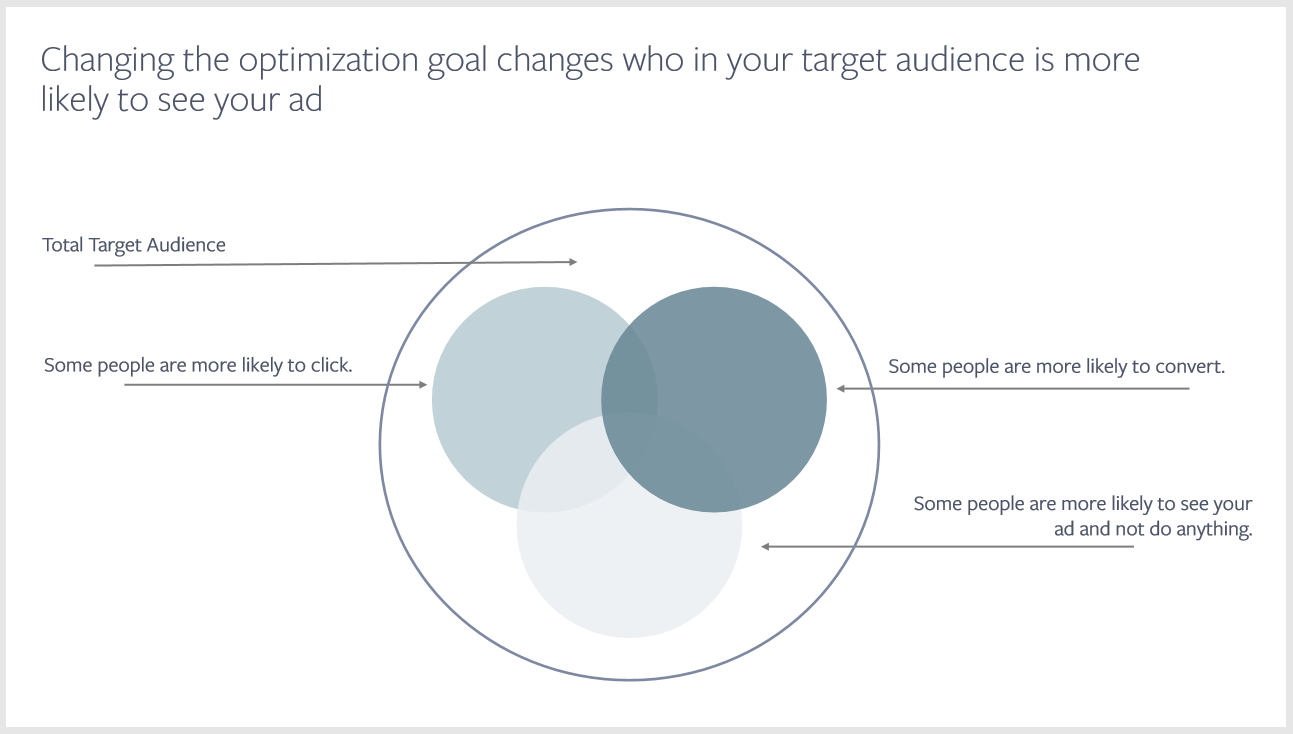 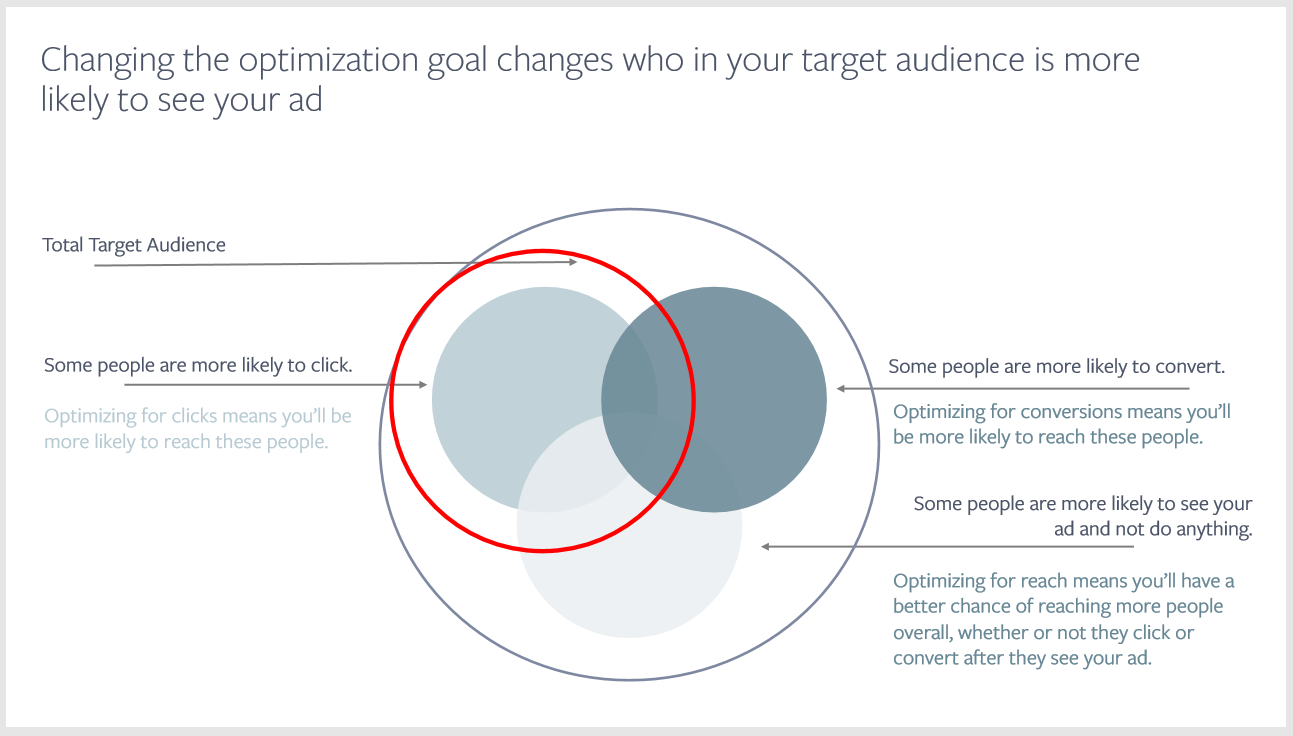 Principle 3 combines principles 1 and 2. Since Facebook wants to maximize user value, an advertiser who aims to drive a rare action will pay a higher cost. This increase in cost is due to Facebook having to take more considerable risks to get the ad in front of the right people to complete the action.

A good general principle is the more an advertiser tries to force itself into user feeds, the higher the marginal cost. Thus, optimizing for conversions in a campaign targeting a minimal number of retargeted site visitors will be quite costly from a Cost Per 1,000 People Reached and Cost Per 1,000 Impressions perspective. This cost is justified because advertisers are putting pressure on Facebook by demanding entrance to these users’ News Feeds and pursuing a rarer user action once they’re there. 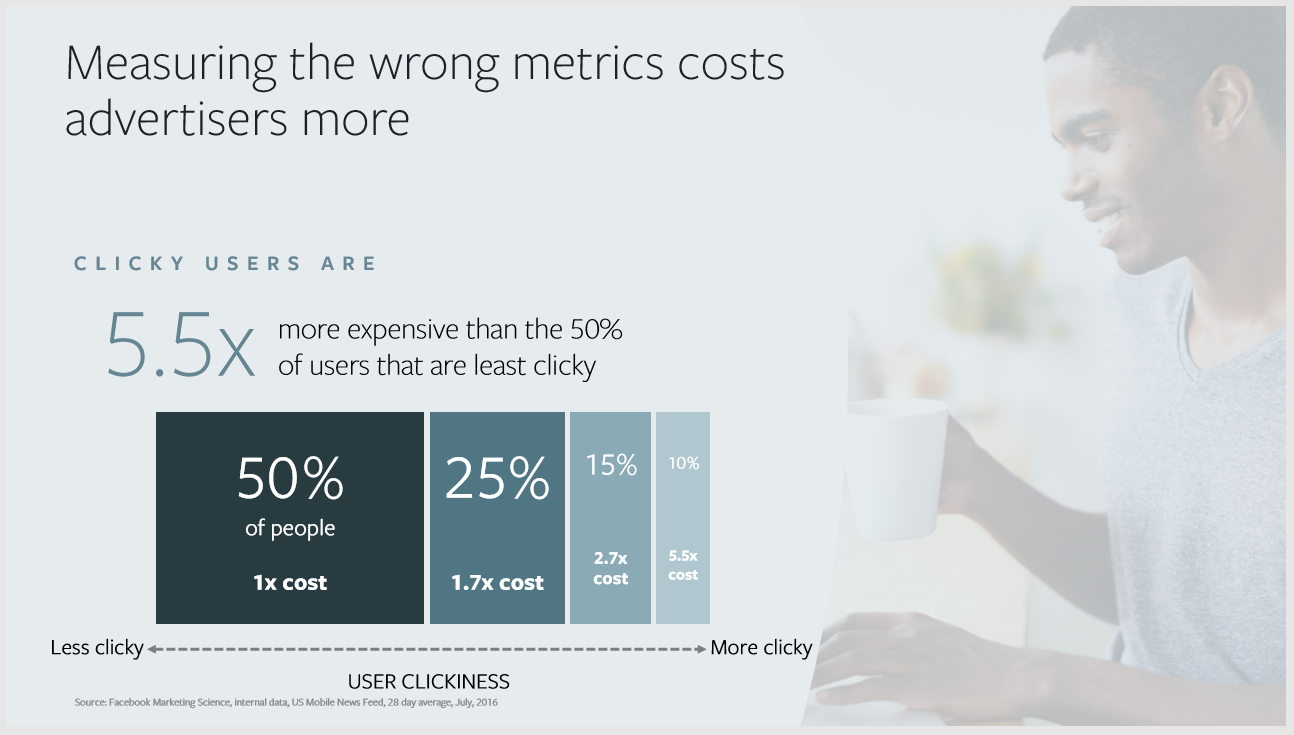 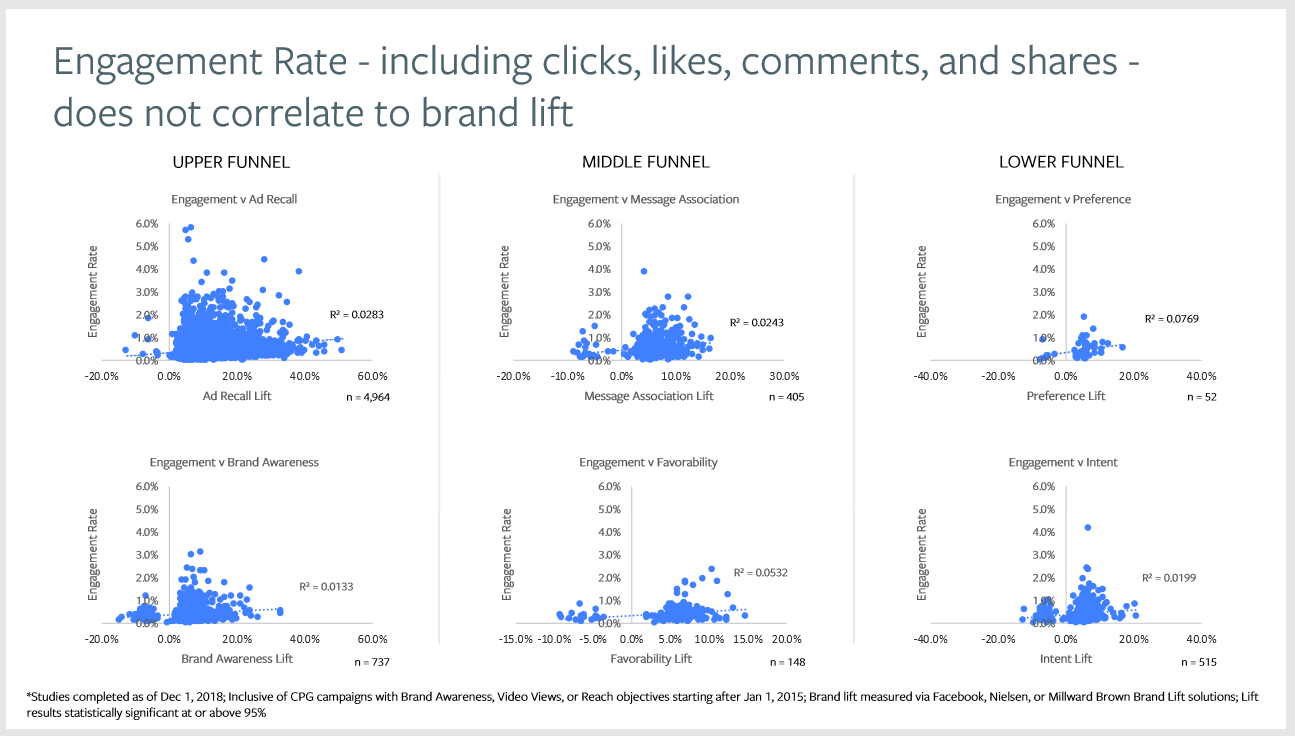 As the above two infographics show, optimization has a significant impact on advertising costs. For years Facebook has been yelling at advertisers, “Yes, we can get you clicks! But are you sure that’s what your brand needs?” We recommend all paid social advertisers thoroughly ponder that question.

After reviewing Facebook’s user knowledge and auction principles, we’d like to make a recommendation. If you believe your potential customers spend time on Facebook’s suite of apps, and you’re looking to generate new customer demand – use a Reach campaign.

Reach campaigns optimize for reach, which is an action Facebook can deliver easily. Because Reach campaigns are not optimized toward driving rare actions, they drive exceptional marginal value when the goal is new customer growth. By not paying the premium price to force your ads into user News Feeds, Facebook delivers your ads to substantially more people. Recent Marketing Mix Model studies from Facebook have shown results supporting the marginal success of this philosophy. It will be challenging to directly connect your Reach campaigns to your increase in business demand, but it will be there. And Adlucent’s Lift Mentality solution will be ready to help you prove it scientifically.

A digital marketing expert with experience managing teams and accounts across a wide variety of verticals and business objectives, Steve Bonino is an Associate Account Director at Adlucent. When Steve is not optimizing digital advertising performance, you can find him reading Shakespeare, cheering for old Notre Dame, or drinking a dark beer with friends.